In each moment the sacred process of death and rebirth is playing out within us. With each breath, something in us is dying: some aspect of who we think we are or what we’re doing here, the death an old dream, a relationship we were sure would last forever, an idea about how it was all going to turn out.

In the face of this dissolution, the question isn’t so much how can we be reborn, but will we participate in death, fully, and with an open heart, paving the way for new forms to emerge, trusting that rebirth will take place according to a timeline originating far away in the stars.

In times of transition, our tendency is to rush to rebirth, quickly back into the known, in an urgent attempt to cure, maintain, or heal that which is dying, that which longs to transform. It is so natural to resist falling apart in our need to put it all back together. But it is only from the core of the womb of death - a death tended to consciously - that re-birth can come into being.

The invitation, which we can at times hear clearly, during the dark of night, in the slowness and the depths, during time with the moon and as we move in and out of states of sleep and dream, is to not abandon death in our rush to be re-born. To not short circuit the intelligence and creativity that death is, and to remember that rebirth is not possible without the creativity of dissolution.

Allow the death some time to unfold, to share its poetry and its fragrances, which are not partial, but of a light that is whole. In those times in our lives, when things are being rearranged and reorganized inside and around us, we can attune to what is truly being asked, whether it is to cure death and reassemble the known, or to allow the forms of love safe passage to continue their journey.


To honor the forms of love as they come into our lives and touch us and share with us their beauty. But equally allow them to dissolve so that new forms may emerge and enchant this place. To give them permission to dance and play and participate fully in the sacred return. 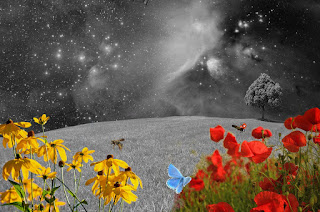 The next book, A Healing Space: Befriending Yourself in Difficult Times, will be published by Sounds True in early 2020, details to come

The next event is The Healing Shame Retreat: Spiritual Awakening and Transforming the Core Wound of Unworthiness, April 24-29, 2019 at Sunrise Ranch in Loveland, Colorado, with co-facilitator Jeff Foster
Posted by Matt Licata at 12:18 PM