Many are familiar with the term “holding environment” as elucidated by Winnicott, a warm and poetic description of a relational configuration rooted in empathic attunement and right-brain to right-brain resonance.

As the matrix of secure attachment, it provides the rich, creative terrain from which we can explore reality, resting and playing in unstructured states of being. From this ground of safety and creativity, we journey out of the familiar, experiment with our vulnerability, and stay embodied to the full range of human feeling.

Any effective holding environment is weaved of qualities of contact and space, dancing in the holy middle where there is intimacy without fusion, closeness without engulfing, tenderness without impinging. This is the soil from a little baby’s brain and heart and nervous system grow. What a miracle. Real magic.

While honoring the interpersonal aspect of holding, there is a transpersonal dimension as well. From this perspective, open awareness itself is the ultimate holding environment. Training ourselves to access, become familiar with, and relax into our true nature reveals the deeper dimensions of contact and space, where we come to the embodied realization that we are always, already being held, by something infinite and vast.

While as an infant we depended upon another to provide this environment for us, it is wired into the human heart. Every inner experience is made of this space, luminous, and undifferentiated from awareness itself. From this perspective, what we are is the quintessential holding environment. Those substances which cause a little nervous system to grow, unfold, and differentiate are the same that keep the stars from falling out of the sky.

While it is unlikely we will ever resolve the mysteries of self and other, intrapsychic and intersubjective, personal and transpersonal, or sun and moon, we can apprehend the miracle together with awe, remembering that we will always be beginners on the path of love and humble messengers of its outrageous, relentless activity. 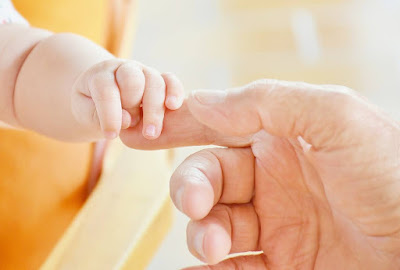 Photo by RitaE/ Germany via Pixabay
Access free videos from Matt here
Posted by Matt Licata at 8:00 AM

Turning toward the broken and the shattered

Sometimes I wonder if all therapy isn’t grief therapy when all is said and done. The original Greek therapeia referred to attending, caring for, sending breath into. Not “curing,” “fixing” or even “healing,” not these heavy clinical words. But by way of our own tenderness, to infuse with life. To surround with warmth, to take the risk that this holding will always ask of us.

To be a midwife for psychic and somatic reorganization, to bear witness to the birth of a new heart, one which will inevitably ache and long and break and shatter and open and crumble in the face of it all. For that is the nature of this human form, which is crafted of particles of mystery, of mercy, of grace.

Things tend to not turn out the way we thought they would, for they are too alive, too magical, too majestic. This “not turning out the way we thought” is not evidence of mistake or that we’ve failed or done life wrong, but of the beloved and her activity here. And her outrageous care for form.

To fall to the ground, to stand back up again, to fail well, to be lost, to be found, realizing that love will assume any of these forms, shifting shapes as it spirals out of the stars and makes its way into this miracle world of time and space.

To grieve the crumbling and ending of one world, the death of a dream that has finished its time here. To allow that dissolution and provide sanctuary and safe passage for these forms to continue their journey into the other world.

The grief of knowing on some deep level that all form must reorganize, for it is its nature to do so: The people in our lives, what we have come to think we are, what has previously provided meaning, our bodies, our own worlds of experience, with even our greatest revelations ground into dust and sent back into the galaxies from which they came.

To turn toward the broken and grieve consciously, to honor the uncertainty, collecting the shards and the ashes and shepherding them. To dare to see the dissolution not as error but as holy, painfully and preciously whole, and to stand in awe as the pieces reassemble. 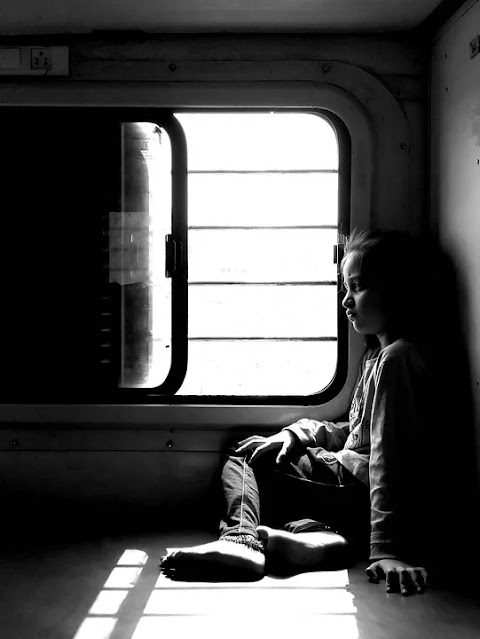 Photo by Shiva Reddy
Access free videos from Matt here
Posted by Matt Licata at 5:00 AM

Caring for yourself in a new way

The next time you notice that you’re attacking yourself, caught in a looping storyline about how you’ve failed, how you’ll never get it right, how there is something just fundamentally wrong with you …

When you’ve become lost in a repetitive narrative about how someone has misunderstood you, how you are not being seen in the way you’d like, or when find yourself complaining about your life or another person …Slow way down. Ground into the earth.Before you abandon yourself and leave your immediate experience, parachuting into the unstable waters of rumination, shame, and blame, slow way down. For this is no ordinary moment. You are being asked to care for yourself in a new way, to cleanse your perception with space, with kindness, with compassion – to pause and to encode a new pathway.With the ally of the breath, shift your awareness out of the overwhelming narrative, for it is no longer safe there. It is not serving you to travel down the conditioned rabbit hole of unworthiness and self-abandonment any longer. These are the leftover grooves of an earlier time, and ache to be reorganized by way of empathy, attunement, and embodied presence.Conserve your precious life energy, remove it from that which is no longer working in your best interest, and direct into your belly, your heart, your throat. And ask: what feeling is wanting to be met now? In what way am I being asked to care for the vulnerable, the tender, and the shaky within me, to no longer project it outward in the movement of self-abandonment and self-aggression? How am I being asked to tend to myself in a new way? To touch the erupting, raw, achy life that is surging now for holding.Look carefully, with curiosity, patience, kindness, and compassion and see the ways you leave the embodied world of pure feeling, bailing on your vulnerability as you escape back into the conditioned narrative of complaint, resentment, shame, blame, and self-attack. Return home.While it may seem you are longing for something outside you, in these moments you are only longing for your own presence. For you need yourself now more than ever. This world needs you now more than ever. 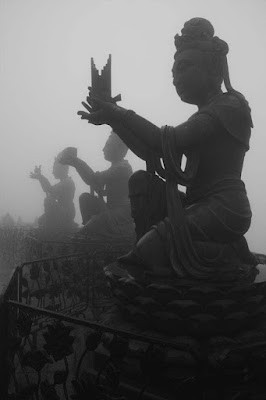 Access free videos from Matt here
Posted by Matt Licata at 5:00 AM

The felt experience of joy

Usually when we speak about the shadow, we're referring to less desirable experience such as unmet jealousy, rage, selfishness, and shame. Usually, the shadowy underworld is seen as the dark repository for “negative” aspects of ourselves, i.e. our terror of intimacy, unacknowledged narcissism, and unmetabolized anger and deep sadness.

But it is not only negative aspects of self that we disavow, split off from, and project. Many of us have lost the capacity to access and embody more “positive” experiences such as contentment, pleasure, creativity, empathy, and connectedness. Even the very natural, organic life-giving capacity to rest in more unstructured states of being and play can come to be associated in the nervous system and psyche as unsafe.

Some of us have even disconnected from the simple experience of joy, a spontaneous sense of elation at being alive. I was once working with a man who was suffering from depression. What we discovered during our time together was how unsafe it was for him to express joy, how the experience of simple delight became tangled in his nervous system with danger and the likelihood of incredibly painful rupture with critical attachment figures in his life.

During our sessions, there were times we would become aware of this very simple, childlike, causeless joy coming to the surface as he was speaking about some experience he had, and how inevitably some (subtle) panic or anxiety would co-arise with the aliveness. He would then quickly disembody: change the subject, generate some sort of conflict between us, “leave” the room and go back into a prior conversation or nervously ask a question, or even just close his eyes and start to meditate.

After this happened a few times, we became curious about what was going on and were able to explore it together. Slowly and safely. With no judgment or shame. So that he had the experience of being felt and understood. Repairing those broken circuitries of love, empathy, presence, and warmth.

Being together in this, he was able access previously unconscious thoughts, perceptions, emotions, and bodily sensations, as well as early memories of how his father reacted to his joy and excitement, becoming aggressive and enraged, demanding that he “grow up” and stop acting like “a baby” and embarrassing the family. And how in response to that, his mother shut down and turned away from him to avoid the conflict.

He felt so lost, unseen, unheld, and un-allowed to be who and what he is, a man who longs to know joy and at times is presented with the opportunity to re-embody to the lost pathways of pleasure and elation deep in his psychic and somatic being.

He came to see how he had equated feeling full of life and natural states of delight, interest, play, and spontaneity with being judged and rejected. Over some time, he began to unwind this organization and was able to slowly re-awaken to this spectrum of experience and touch the natural joy he had disconnected from at an earlier time in his life.

While the term has a negative, darkened connotation and imagery, it is not only “negative” experience that we place in the shadow, but any material that has not found a home within the relational field.

To retrieve the lost joyous little boy and girl is an act of love, really, not only for one’s self but for all of life. 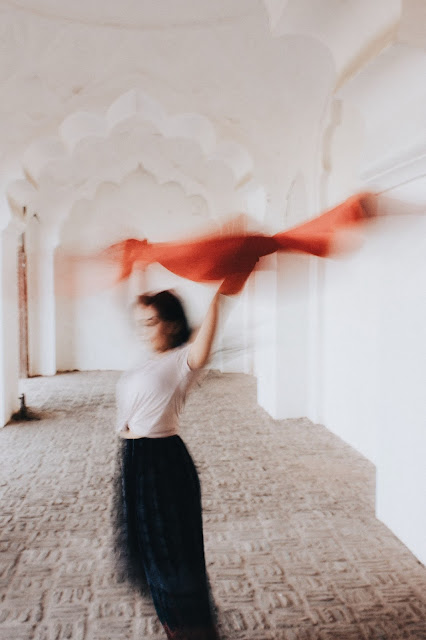 Photo by Tabitha Turner
Access free videos from Matt here
Posted by Matt Licata at 7:00 AM