A moment of mindfulness, presence, and non-judgmental compassion. For an instant, the ancient circuitry of self-abandonment is replaced with pathways of empathic attunement. A moment of rest from habitual consciousness, repetitive thinking, that panicky feeling in the belly, the worry that something is wrong.

In the next moment, we have left the spontaneity of now and traveled into past or future, drawn magnetically to the images, memories, daydreams, and confusion of conflicting narrative and contradictory feeling. It can feel like falling down a rabbit hole. But like Alice in her journeys into Wonderland, things are not often as they appear.

When seen with open eyes and tender heart, even the falling itself is perceived as it is—as some wild kind of grace and invitation into the archetypal dance of hide and seek. In the original illustrations, when Alice is falling, we see that she encounters pieces of psyche and soma that she has lost along the way, in trying to fit in to a world that was too fixed and solid to stay with the majestic imagination of a ripening little being.

The Cheshire cat is sure to be nearby, a new hermetic guide to the underworld, revealing the borderline and transitions and the creativity found only in embodied attunement to the unknown.

When you notice that you have fallen, realize that the mystery has opened. While the temptation is to conclude that you have failed, the invitation is into curiosity and imagination, to become fascinated with what it is like to become distracted and the gloriousness of even that… to touch the mystery of lost and found and very gently return into the spaciousness of now. Only to become lost once again, and then found, and then lost, and then…


The fantasy of being “permanently” found is washed away by love itself, who wants only all of you, not just the one who believes they have been found. 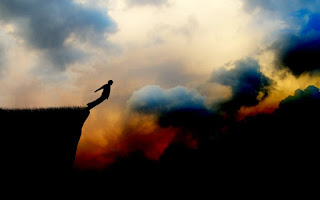 My next two events:

The Path is Everywhere: A Weekend Intensive, June 15-18 in Loveland, Colorado

The Great Befriending: A Five-Day Journey of Self-Love, Deep Rest, and Coming Alive (with Jeff Foster), September 21-26 in Loveland, Colorado