A reclaiming of joy


Usually when we speak about the shadow, we're referring to less desirable experience such as unmet jealousy, rage, selfishness, and shame. Usually, the shadowy underworld is seen as the dark repository for “negative” aspects of ourselves, i.e. our terror of intimacy, unacknowledged narcissism, and unmetabolized anger and deep sadness.
But it is not only negative aspects of self that we disavow, split off from, and project. Many of us have lost the capacity to access and embody more “positive” experiences such as contentment, pleasure, creativity, empathy, and connectedness. Even the very natural, organic life-giving capacity to rest in more unstructured states of being and play can come to be associated in the nervous system and psyche as unsafe.

Some of us have even disconnected from the simple experience of joy, a spontaneous sense of elation at being alive. I was once working with a man who was suffering from depression. What we discovered during our time together was how unsafe it was for him to express joy, how the experience of simple delight became tangled in his nervous system with danger and the likelihood of incredibly painful rupture with critical attachment figures in his life.

During our sessions, there were times we would become aware of this very simple, childlike, causeless joy coming to the surface as he was speaking about some experience he had, and how inevitably some (subtle) panic or anxiety would co-arise with the aliveness. He would then quickly disembody: change the subject, generate some sort of conflict between us, “leave” the room and go back into a prior conversation or nervously ask a question, or even just close his eyes and start to meditate.

After this happened a few times, we became curious about what was going on and were able to explore it together. Slowly and safely. With no judgment or shame. So that he had the experience of being felt and understood. Repairing those broken circuitries of love, empathy, presence, and warmth.

Being together in this, he was able access previously unconscious thoughts, perceptions, emotions, and bodily sensations, as well as early memories of how his father reacted to his joy and excitement, becoming aggressive and enraged, demanding that he “grow up” and stop acting like “a baby” and embarrassing the family. And how in response to that, his mother shut down and turned away from him to avoid the conflict.

He felt so lost, unseen, unheld, and un-allowed to be who and what he is, a man who longs to know joy and at times is presented with the opportunity to re-embody to the lost pathways of pleasure and elation deep in his psychic and somatic being.

He came to see how he had equated feeling full of life and natural states of delight, interest, play, and spontaneity with being judged and rejected. Over some time, he began to unwind this organization and was able to slowly re-awaken to this spectrum of experience and touch the natural joy he had disconnected from at an earlier time in his life.

While the term has a negative, darkened connotation and imagery, it is not only “negative” experience that we place in the shadow, but any material that has not found a home within the relational field.

To retrieve the lost joyous little boy and girl is an act of love, really, not only for one’s self but for all of life. 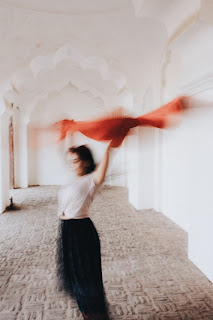 Photo by Tabitha Turner
Learn more about my new book - A Healing Space: Befriending Ourselves in Difficult Times - and read Editorial Reviews here. For a full list of online retailers, see the book's page at my website here.
To learn more about and purchase my previous book - The Path is Everywhere: Uncovering the Jewels Hidden Within You - please visit the book's page here.
Learn more about my online community, Befriending Yourself: Finding Safety and Rest in Difficult Times
Posted by Matt Licata at 7:00 AM